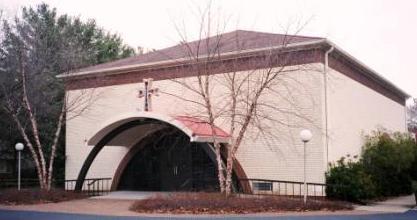 A SHORT HISTORY OF THE DORMITION OF THE THEOTOKOS GREEK ORTHODOX CHURCH OF GREENSBORO, NORTH CAROLINA

In 1944 the members of the Greek Orthodox community held a meeting and drafted a petition to the Greek Orthodox Archdiocese of North and South America requesting a charter to formally organize a parish. Archbishop Athenagoras granted the charter in 1945. A building campaign was then launched. In 1946 a the ladies in the new parish organized a chapter of the Ladies Philoptochos Society. A Greek Youth Club was also formed. Within a couple of years the financial situation had so improved that the Archdiocese was able to assign a priest to the new community.

In 1948 a two story house and lot in downtown Greensboro was purchased. The home, located at Oak Court and Church Street, was renovated as a church and on November 21st the church opened its doors. Mr. Andrew Kypriss was selected as the godfather of the church edifice and he named the church “KOIMISIS THS THEOTOKOU” or Dormition of the Theotokos (Mother of God).

Desiring to erect a Byzantine-styled church, property was purchased at Kensington Drive and West Market Street yet new zoning laws rendered the site unsuitable due to the sites small size and limited parking. The property was sold for $28,000 to St. Andrews Episcopal Church which needed the site for parking.

In 1955 the community bought a four-acre plot for $3,400 on Lawndale Drive for a future recreational center. The members hoped that after the recreational center was built, a church could also be constructed. Chartered as the Hellenic Community Center, the recreational facility was built in 1957. Eventually, in addition to being used for the community’s social gatherings, it was later used for Sunday School classes. On October 17th, 1962 Fr. Nicholas Macropoulos fell asleep in the Lord.

Fr. Nicholas Nicholaides (1963-1964) Fr. Nicholaides succeeded Fr. Macropoulos, but stayed a very short time in Greensboro, before his transfer in the fall of 1964. A search was begun for a new spiritual father. In the interim substitute priests served the community once or twice a month. Despite this interruption, Sunday School continued to be taught on a regular basis.

Fr. Nicholas Michael Sitaras (1964-1968) After a search Fr. Sitaras was appointed as the parish priest. Fr. Sitaras was born in Chios, Greece. He studied theology in Athens and was ordained to the priesthood in 1953. He married Irene Manikas. In the 1960 Father and Presbytera Sitaras moved to the United States. Prior to coming to Greensboro, Father served communities in Morgantown, West Virginia, and Steubenville, Ohio. Fr. Nicholas served the faithful at Dormition until 1968. He subsquently ministered several other communities, Bangor, Maine, Ft. Pierce, Florida, Augusta, Georgia, Pittsburgh, Pennsylvania, Wilkes-Barre, Pennsylvania and Mattituck, New York. Fr. Sitaras retired to Florida. He fell asleep in the Lord on November 26, 2006.

Fr. Andrew Georgaroudakis (1968- 1973) succeeded Fr. Sitaras. Under Fr. Andrew the “Greek Festival” concept was introduced to the parish as a one-day affair. Blue Bell had built a large office complex next to the Oak Court property. They came to the Parish Council with a proposal to buy the property. At a General Assembly meeting in 1969 the community voted to sell the Oak Court church property for $45,000. After the sale, the parish temporarily used the Hellenic Community Center on Lawndale Drive. It’s use as a recreational facility was immediately discontinued when the site began being used as the church building.

A Building Committee was established with Dr. Nicholas Bartis and George Sipsis as co-chairmen. Architects were interviewed and drawings for a complete church complex with ample parking on the four-acre site on Lawndale. In the meantime commercial development began to spread into the Lawndale Drive area. Due to this, some members of the community felt that the church complex should be built in a more residential-like atmosphere. Bill Anton spearheaded the search for a new site for the future church. With the efforts of Steve Bartis, Minas Dascalakis and George Sipsis, a lot on the corner of Friendly Avenue and Westridge Road was purchased in 1969 for a sum of $28,000.

Plans were made to construct the church first and then build the community center. The architectural plans, developed by Walter Blue, were approved by Bishop Iakovos of Katania and the Greek Orthodox Archdiocese. During these preparations Fr. Andrew was transferred to another parish in Indiana.

Fr. Joachim Pantelis (1973-1978) was assigned to serve the community. In February, 1974 Bill Anton, turning the first bit of dirt with a gold-plated shovel, broke the ground for the new church edifice on Westridge. Helen Peterson, President of the Daughters of Penelope and Lambros Megremis, President of the Order of AHEPA, also participated in the ground-breaking ceremonies. The cornerstone was laid on March 2, 1974. Dr. Nicholas Bartis and Matthew Pappas laid the first bricks for the cornerstone. Graham Construction Company of High Point undertook the construction. The church edifice was completed in early 1975.

The interior of the church was furnished through the generosity of many people and organizations. The Philoptochos donated the red carpet, the Daughters of Penelope gave the pulpit which was designed and made by Kostas Tektonides, the iconostasion from the original church on Oak Court was refinished and installed in the new church. The icon of the Platitera on the apse, painted by Dr. Andreas Nomikos, was donated by Vasso Pappas in memory of her husband Matthew Pappas. The Bishop’s throne, also made by Kostas Tektonides, was donated by Eleni Agapion in memory of her husband Agapios. The church pews were donated by individuals. The altar was donated by Mr. and Mrs. James Georgis. The cross on the front exterior of the church was donated by Mr. and Mrs. James Kazazes while the GOYA gave the sign displaying the church name on the front of the building.

In 1977 the property on Lawndale Drive was sold for $150,000. These funds enabled the community to fund the construction of a fellowship hall. It was begun in the fall of 1977 by the Bar Construction Company under the guidance of George Sipsis, the Building Chairman. In the summer of 1978 Fr. Joachim was transferred.

Interim (1978-1981) During a three year interim, Fr. George Paulson, a chaplain from the U.S. Navy was assigned to tend the spiritual needs of the community. Fr. Paulson staying to help the parish until June, 1981. He celebrated liturgy every other weekend while Fr. Dennis Canavos from Winston-Salem filled in when Fr. Paulson was not available.

By the spring of 1979 the Fellowship Hall was completed. With the church and hall completed, the complex was ready to be blessed. The opening of the doors ceremony was held April 8, 1979 with Bishop John officiating. Jerome Pappas opened the doors in memory of his nephew, Peter Paterson.

Fr. Gregory Champion (1981-1997) Fr. Champion, a convert to the Orthodox Faith, came to Greensboro with Presbytera Georgia after a successful ministry (1973-1981) at the Transfiguration of Our Lord Church in Mason City, Iowa. During Fr. Champion’s sixteen years at Dormition, stained glass windows were added to the church. In 1983 the annual Greek Festival was expanded to a two day event and held on the third weekend of September. On November 5, 1989 the church edifice was consecrated by Bishop Isaiah of Aspendos, Chancellor of the Greek Orthodox Archdiocese. Relics of St. George, St. Kyrikos and the Holy Fathers martyred in Sinai and Raitho were solemnly placed within the holy altar.

Fr. Johannes (Hans) Jacobse (1998-1999) Fr. Hans was born in the Netherlands but was raised in the United States. He has a B.A. from the University of Minnesota, and a M. Div. from St. Vladimir's Seminary. He studied the Greek language at the University of Thessaloniki, Greece and is a fellow at the Hubert H. Humphrey Institute of Public Affairs. Before coming to Greensboro, he served the Church in the Diocese of Chicago. Following his pastorate at Dormition of the Theotokos he served the Church at St. Basil's Academy before returning to parish ministry. He subsequently shepherded parishes at Annunciation Church in Ft. Myers and at St. Katherine's in Naples, Florida. He is married and has one daughter.

Fr. Vasile Mihai (1999-2005) Fr. Vasile's pastorate lasted six years. Fr. Vasile was born and grew up in Romania. In 1976 he graduated from college with a B.S. in computer sciences and from law school in 1984. In 1976 he married Danielle. The couple had two children, Eugene and Irene. On June 6, 1987 he defected from the communist regime and lived for a time in a refugee camp in Latina, Italy. In June of 1988 he was able to emigrate to Jacksonville, Florida where he worked as an analyst programmer. After three years Fr. Vasile was reunited with his family. Eventually the family became naturalized US citizens.

In 1996, heeding a call to serve God, Fr. Vasile enrolled at Holy Cross Greek Orthodox School of Theology. He was ordained to the diaconate by Bishop Philotheos of Meloa on November 29, 1998 in Randolph, New Jersey and served the school's chapel during the week and at St. Andrew Greek Orthodox Church in Randolph, New Jersey on the weekends. He graduated on May 15, 1999 with a M.Div. He was ordained to the priesthood on June 6, 1999 at St. George Cathedral in Greenville, SC by Bishop Alexios of Atlanta. He was assigned to the Dormition of the Theotokos Greek Orthodox Church in Greensboro, North Carolina where he celebrated his first service on June 13, 1999. In June of 2005 Fr. Vasile was transferred to St. Paul's Greek Orthodox Church in Savannah, Georgia where he currently serves. In the spring of 2006 he recieved a D. Min. degree from the Pittsburgh Theological Seminary.

Fr. Dionysios Listermann-Vierling (2005 -2009 ) Fr. Dionysios was born July 27, 1955 in Cincinnati, Ohio and converted to Orthodoxy in 1981. Fr. Dionysios studied at Holy Cross Greek Orthodox School of Theology, where he graduated in 1986. He married Elena Monidis on January 10, 1987. The couple had one child, Anthony Donald (Maximilian). Fr. Listermann-Vierling was ordained to the diaconate on April 4th, 1987 in Chicago. He was ordained to the priesthood on April 11, 1987 in Chicago. Prior to coming to Greensboro Fr. Dionysios served communities in Waterloo, Iowa (1987-1991), Lexington, Kentucky (1991-1997) and Tallahassee, Florida (1997-2005). On July 27, 2005 he celebrated his first liturgy at Dormition of the Theotokos Greek Orthodox Church in Greensboro, North Carolina. In September, 2008 Fr. Dionysios announced that his last day at Dormition would be January 18, 2009.

Father was born in Rhodes, Greece. In 1968, he and his family left Greece for the United States and a better life, leaving behind his childhood dream of becoming a priest.  Father, his parents and 3 sisters immigrated to Connecticut and in the years following he attended college at University of Connecticut, married and had two children, Anastasia and Paul.  Prior to going to Seminary, Fr. Sarantis and his wife, Presbytera Norma owned and ran a restaurant.  During this time he was a member of St. George parish in Hartford, Connecticut and served as president of its parish council, GOYA advisor and chairman of the annual church festival.

The calling to become a priest never left Fr. Sarantis and in 2000, he entered Holy Cross Seminary in Boston for the three year master degree in Divinity.  Father was ordained in 2003 and assigned to St Markella Greek Orthodox Church in Wantagh, NY in January of 2004 where he served until December 2017. 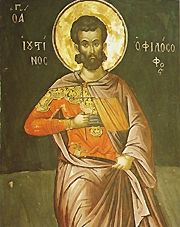 Justin the Philosopher and Martyr and his Companions; Pyrros the Hieromartyr

Visit the Online Chapel for more daily readings, hymns, a monthly calendar of saints and feasts, and more.